The thyroid is a small, butterfly-shaped gland positioned on the front of the neck.

Its job is to produce thyroid hormones that the body needs for the endocrine and metabolic systems. Sometimes, it can be affected by cancer, infections, or disease. These illnesses will cause the thyroid not to function at its best, which means it will either produce too much, or too little, thyroid hormones.

When the thyroid hormone produced is too little, this is called hypothyroidism.

Initially, it makes a person feel lethargic and exhausted, even when they have had plenty of rest. Cold weather or cold rooms will become intolerable. Most people gain weight from the decrease in their metabolism too. Their hair will fall out, which leads to thin spots on the scalp. And, there are usually also signs of muscle weakness and fatigue.

Some of the other symptoms of hypothyroidism that are common include:

The first of which is a deficiency of iodine. Iodine is found in shellfish, shrimp, salt, and other foods. If a person does not get enough of these foods, they will not receive the proper amount of iodine that the thyroid needs to function at its best.

Another cause of low thyroid production is Hashimoto’s disease. This is a disorder that causes the immune system to attack the thyroid. The resulting damage leads to inflammation and swelling of the thyroid gland, which in turn reduces its ability to function normally. Thyroid cancer and infections can also cause this to happen too.

The last possible cause of low thyroid production is when a person inherits thyroid problems from one of their parents, and their thyroid just naturally does not produce enough thyroid hormones. 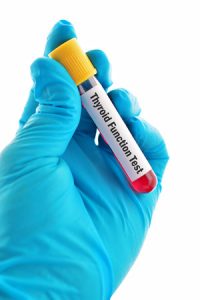 To test for problems with thyroid production, a complete blood panel of TSH, T3, and T4 levels should be done. Many cases of low thyroid production are misdiagnosed because only one or two of the levels are checked. The thyroid produces T3 and T4, and the pituitary gland produces TSH. The hypothalamus produces TSH Releasing Hormone. All of these levels must work together to have a proper functioning thyroid.

Besides the blood panel, a thyroid scan or ultrasound can be performed. This will allow a more in depth view of the thyroid, so any nodules, swelling, or other problems can be seen more easily by the doctor. If there is a possibility of cancer of the thyroid, a test called a “needle biopsy” is done. To test the ability of the thyroid to easily absorb its needed amounts of iodine, there is also a Radioactive Iodine Uptake (RAIU) test. A pill containing radioactive iodine must be swallowed before the levels of absorbed radioactive iodine are measured with a gamma probe several hours later. This requires exposing a person to radioactivity though, which increases their risk for developing cancer later on.

The treatment for this disease varies depending on what the cause is.

If the thyroid simply isn’t producing enough thyroid hormones because of a genetic predisposition to function poorly, the solution is often to provide the patient with thyroid support supplements. It comes in a capsule that is fairly inexpensive compared to other prescription medications, so this is usually the easiest treatment option.

If the decreased amount of thyroid hormone is because of an iodine deficiency, the reason for a deficit in the patient’s diet must be determined. If they are struggling to get enough nutritious foods to eat, there is a possibility that they might be deficient in other vitamins and minerals too. In cases like this, a nutritionist must be called in to work with the patient, so they can learn to eat a more balanced diet.

This is common with vegetarians and vegans who often struggle with getting enough iodine because of the omission of meat products from their diets. If the remainder of their food choices are healthy, an iodine supplement can be added to provide the missing amount. It generally takes about two weeks for the person to begin to feel the effects of it though.

The solution for low thyroid production because of Hashimoto’s disease or thyroid cancer is more serious. The thyroid has to be surgically removed, or treated with radioactive iodine. Afterwards, the person must receive supplemental thyroid hormone medications for the rest of their lives.

The Seriousness of Untreated Thyroid Problems

As mentioned above, there is a genetic factor to thyroid problems. If either parent has a history of thyroid disease, they can pass this on to their children. It doesn’t matter which type of thyroid disease that they have either. A parent with low thyroid production could potentially have a child with Hashimoto’s disease, hyperthyroidism, or hypothyroidism. By seeking treatment, the risk is reduced though.

This is especially important for women who are pregnant because babies who are born with congenital thyroid problems can have reduced intelligence, stunted growth, developmental delays, and other health problems. Because of this, many doctors recommend that women take prenatal vitamins that contain iodine. However, a woman who has hypothyroidism, but experiences bouts of hyperthyroidism, must be sure to let her doctor know about her condition before taking the prenatal vitamins. A sudden increase in the amount of iodine that she consumes could cause her to have a thyroid storm. This is a dangerous condition where a person’s heart rate increases dramatically, and they can experience hallucinations, panic attacks, and even fainting, which is dangerous to the health of both the mother and her baby.