If you are among the millions of people across the world who suffer from thyroid disorders, a medicinal herb called Ashwagandha, native in Asia, Mediterranean, and parts of Africa, could be just what you need.

Ashwagandha is popular in Ayurveda medicine, and Indians have used it for more than 3,000 years to treat a wide range of healthy disorders. Its scientific name is Withania somnifera Dunal, and it belongs to a class of herbs called rasayana, praised for their revitalizing effects on health. Ashwagandha is also popular as Indian ginseng, or winter cherry.

The active chemicals in Ashwagandha are identical to those found in ginseng, but scientific studies have proven its superiority as a stress-reliever compared to its Asian cousin. Ayurveda doctors have for a long-time prescribed Ashwagandha to relieve exhaustion caused by both mental and physical strain, and scientists have recently confirmed its effectiveness.

In a double blind study, researchers found that Indian Ginseng was effective in preventing vitamin C deficiency, stress-related ulcers, and strengthening ones’ stress endurance and energy levels (1). However, Ashwagandha is now more popular as a treatment for thyroid disorders than as a stress reliever and/or energy booster.

Before exploring how Ashwagandha exactly helps the thyroid, it is important to explain the basics. Everyone has a thyroid gland, the butterfly shaped gland located in the front part of the neck. The thyroid gland is part of the larger endocrine system responsible for production of hormones needed to regulate body functions and organs.

Thyroid hormones, which are released directly into the blood, are transported throughout the body and are responsible for controlling your liver, kidney, heart, skin, brain, metabolism, and the immune system. Thyroid hormones (T3 and T4) act on almost all cells in the body. They play key roles such as:

Many factors, both disease-related and regular, influence production of thyroid hormone.

The Harmful Effects of Thyroid dysfunction

Thyroid Malfunction Can Cause Mental Disorder

In addition, symptoms such as tiredness, fatigue, weight gain, depression, memory loss and concentration impairments are common to both bipolar and unipolar disorders and hypothyroidism (2). 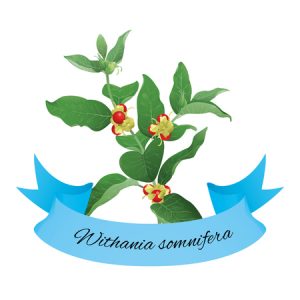 From lab studies with mice, scientists at D.A University, India, have found that Ashwagandha roots have the capacity to stimulate thyroid hormones. More specifically, the findings suggest that it boosts serum concentrations of thyroid hormone, making it an effective remedy for hypothyroidism.

The function of the thyroid gland is regulated by two formations of the brain: the hypothalamus and the pituitary gland.

The hypothalamus collects input from body systems and evaluates if the thyroid gland should decrease or increase section of T4 and/or T3.

It’s at this point that Ashwagandha comes in as a remedy for thyroid malfunction. It directs thyroid stimulating (THS) hormone to travel to the pituitary. TSH triggers the thyroid gland to produce sufficient amounts of T4 and T3.

T4 and T3 upregulate metabolism and cellular utilization of energy. Once T3 has accumulated to optimal levels, the hypothalamus notes it and directs pituitary gland to stop production of TSH.

Ashwagandha has been proven to stimulate production of more T4 hormone – which explains why it is such a popular natural remedy for hypothyroidism. A 2014 placebo-controlled study to monitor thyroid indices for T4, T3 and TSH of 60 patients taking Ashwagandha for bipolar disorder found that patient taking Ashwagandha reported increased production of T4 and stable levels of TSH.

The scientists concluded that people suffering from hypothyroidism can benefit from taking Ashwagandha, mainly because of its anti-inflammatory, T4-elevating, antidepressant, antioxidants, and nerve-protecting properties (3).

Note that excess amount of T4 in the body can cause oxidative stress. When the human body is experiencing oxidative stress, its ability to fight free radicals is impaired.

However, besides stimulating increased production of T4, Ashwagandha has the unique ability (antioxidants) that enable it to scavenge free radicals, reducing the impact or preventing both oxidative stress and lipid peroxidation (2).

Simply put, even as it stimulates thyroid to produce more T4, Ashwagandha keeps risks associated with excess T4 in the body under check. In any case, as T4 is produced and converted into the active T3, the risk associated with oxidative stress in patient suffering from hypothyroidism is very low. 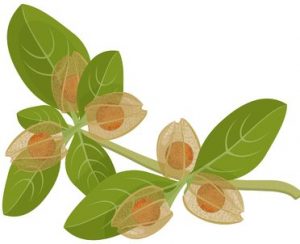 Some studies have suggested that Ashwagandha has a sort of different effect with those with hyperthyroidism. By stimulating selective increase of T4 levels in the body and simultaneously lowering oxidative stress, Indian ginseng can slow production of T3.

Note that T3 is the key culprit for problems associated with hyperthyroidism.

However, when being taken to control hyperthyroidism, the amount of Ashwagandha needs to be kept under tight control. A low dosage, as often recommended by Ayurveda doctors, may be sufficient to trigger one’s natural thyroid hormone control mechanism (which regulates T4 levels by lowering TSH levels) to swing back to action.

Is Ashwagandha for Thyroid More Effective When Taken Combined with Other Herbs? Most Ayurveda doctors often administer herbs in combination of several plant extracts, mainly to boost effectiveness and to downplay possible side effects of specific plant extracts.

For example, Ashwagandha is often administered in combination with other two extracts – bauhinia bark, and guggulu gum – to boost liver health, keep lipid peroxidation under control, and to control thyroid function.

Based on this Ayurvedic clue, earlier scientific studies on Ashwagandha have suggested that it is effective at dosage of 600-1,200 mg per day. The studies have found the dosage to be both safe and effective in rectifying thyroid malfunction. In capsule form, this equates to about 1-2 capsules, two times daily.

However, Ashwagandha has been found to be effective even at low doses. The lowest effective dose of Ashwagandha leaf or root extract is 50-100 milligrams. On the other end, even doses as high as 6,000 milligrams of extract daily have shown to be safe. Consult your doctor on the appropriate dosage for your case.

Most thyroid supplements include Ashwagandha. They often contain other helpful herbs as well.

Clinical evidence of effectiveness of Ashwagandha as a remedy for thyroid problems.

The Benefits of Ashwagandha

Besides being useful for the thyroid, Ashwagandha delivers a host of other health benefits. The most important being: