The thyroid is a small, butterfly-shaped gland which produces hormones that travel through the blood to all parts of your body, where they do their work. Hormones produced by thyroid help all organs in your body function properly. For instance, they control how the body uses food for energy. One important aspect of thyroid’s functionality is a feedback loop and this post will inform you more about this subject.

What is a feedback loop?

Regardless of the function it controls, the endocrine system follows the same pattern that includes receiving a signal, hormonal response, and reaction. Feedback loops regulate a vast majority of endocrine activities. Basically, feedback loops function like a thermostat which responds to the changes in temperature and informs the “furnace” when to switch on/off.

In humans, the hypothalamus acts like a thermostat of feedback systems and the endocrine glands act like the air conditioner or a heater. Hormones are either released or stop being produced in response to the messages sent by the hypothalamus. 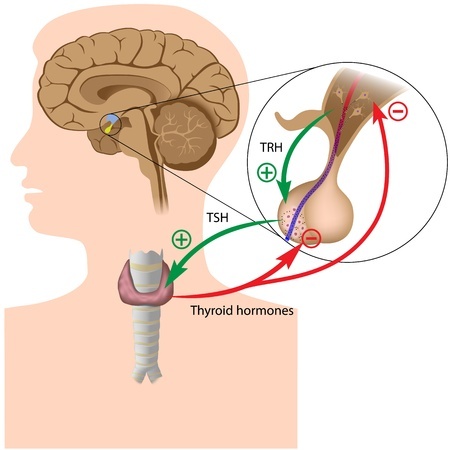 In order to understand how thyroid functions one has to know more about the thyrotropic feedback control. The thyrotropic feedback control is defined as a feedback mechanism that connects thyroid gland and pituitary. Why? That’s because the thyroid gland is controlled by the pituitary, a gland about the size of a pea, located at the base of the brain. Therefore, this particular feedback loop has a unique purpose to regulate or control the amount of thyroid hormones present in blood plasma.

The evidence shows that production of thyroid hormone is controlled by a complicated mechanism of positive and negative regulation i.e. feedback mechanisms. Your pituitary gland secretes the gonadotropic hormone called thyrotropin (TSH) which promotes secretion of T4 (thyroxine) and T3 (triiodothyronine) in the thyroid gland.

At the same time, thyroid hormones inhibit the secretion of TSH in the form of negative feedback to establish a balance between the involved hormones. The feedback interaction is contributed by complementary feedback loops:

According to a study whose findings were published in the journal Cybernetics and Systems, ultra-short feedback loop along with stochastic stimulation are involved in the generation of TSH pulses in the pituitary.

Euthyroidism refers to the normal state with regular function of the thyroid gland as well as closed and functional thyrotropic feedback control. Although this is a normal condition or functioning of the thyroid gland, it is poorly studied particularly because research is primarily navigated towards hyper- and hypothyroidism.

A study whose findings were published in the journal Thyroid evaluated the progression in time from euthyroidism to hypo- or hyperthyroidism and made interesting discoveries. Results showed that about 6.7% of euthyroid participants experienced a dysfunction of the thyroid gland, especially hypothyroidism, after a six-year follow-up.

Hypothyroidism is a condition that indicates the thyroid gland is underactive. Basically, it means this gland can’t produce sufficient amount of thyroid hormone to keep the body functioning normally.

What most people don’t know is that there are different types of hypothyroidism:

Despite the fact that everyone can develop hypothyroidism, some people have a higher risk. For example:

Hyperthyroidism refers to the state of overactive thyroid i.e. the gland produces excessive amounts of the hormone thyroxine.

We can divide hyperthyroidism into two categories:

Just like hypothyroidism, the hyperthyroidism is more common in women than in women. The condition tends to run in families, which is why people with a history of hyperthyroidism in the family should consult a healthcare provider. Your physician will inform you what it means for your health, he or she may also recommend monitoring of thyroid function.

It can be difficult to diagnose hyperthyroidism because it can mimic symptoms of other conditions. Signs and symptoms of this health issue include:

Thyrotoxicosis refers to the excessive level of thyroid hormone in the body. A person with this condition also has a low level of thyroid stimulating hormone (TSH) in the bloodstream. This happens because the pituitary gland assumes you have enough thyroid hormone. Since the bodily functions speed up with thyrotoxicosis, it is not uncommon for individuals with this condition to experience mood swings and irritability.

The most common cause of thyrotoxicosis is hyperthyroidism, but it can also occur due to the inflammation of the gland (thyroiditis) or due to taking thyroid medications.

Feedback loops are the essential component of most control mechanisms in physiology, particularly in the endocrine system, and thyroid hormones aren’t the exception. Although cases of positive feedback can occur, a negative feedback loop is widely prevalent. When it comes to the thyroid gland, the feedback loop is associated with the relationship with pituitary, which controls the thyroid and its hormones. This feedback loop has different functional states including normal (euthyroidism) to more well-known conditions such as hyper- and hypothyroidism. However, there is still a lot we don’t know about thyroid feedback loop, which is why it is necessary to do more research on this subject.