Herbal medicine refers to the use of plant-based products and infusions to treat ailments and maintain health. Various parts of plants are used depending on the required effect and the particular plant. Roots, stems, leaves, berries, flowers have all been used in one way or another. Even the bark of trees has it’s medicinal uses. Ashwagandha is one of the most popular and effective herbal methods of trying to balance thyroid hormones.

Once the province of quacks and hippies, herbalism is now becoming more mainstream and is frequently used to support conventional medical treatments. Interestingly, research has discovered that people in different parts of the world have been using similar plants to treat corresponding ailments for thousands of years. One such herb is Bacopa Monnieri (L), Pennell.

Bacopa Monnieri, or water hyssop is an aquatic herb found in tropical and subtropical regions of the world. It is a creeping herb found in marshy habitats. Also known as Brahmi, the plant is endemic in Asia, but can also be found in Parts of Africa, Hawaii and the Southeastern states in the USA. A full overview can be found here.

Bacopa has long been used as a medicinal herb in Ayuvedic practices in India where it was considered to be a tonic for the brain and nerves. As with any herb, there is typically a range of active compounds that are responsible for its benefits. Because of this, it is difficult to find reliable clinical data to substantiate the effects of specific aggregates on the body. However, due to its varied therapeutic potential, Bacopa monnieri has now become a topic of study for modern medical researchers.

Despite several scientific studies, the exact activities of the components of Bacopa have not yet been established. Though research has shown, that the potent compounds in the herb have a positive effect on the brain cells, aiding and promoting re-generation of the tissue. Additional effects are improved memory in healthy individuals, as well as those who are suffering cognitive deterioration. Bacopa is also thought to inhibit degeneration associated with Alzheimer’s disease.

Bacopa was traditionally consumed with ghee (clarified butter) in India. It is now often used in complementary or herbal medicine in the Western world. Since it is a fat-soluble substance, and requires a lipoid transporter to enable it to be absorbed into the body. It is recommended that it is taken at mealtimes.

Bacopa now known for its many useful properties, is thought to aid weight loss due to its capacity to control hunger, improve energy and elevate mood levels. Unfortunately, Bacopa takes the time to work, and its memory enhancing effects may take as long as 8-12 weeks to show any signs of improvement.

The thyroid gland is a butterfly-shaped structure at the front of the neck, wrapped around the windpipe and situated just below Adam’s apple. It is an important part of the endocrine system secreting a number of hormones which have effects on a variety of bodily functions, ranging from heart health to metabolism.

Thyroxin is one of the most important hormones produced by the thyroid gland because of its impact on the overall health of the body. Since the thyroid gland produces the hormones that control our metabolic rate, it is also responsible maintaining the energy levels in our body. If the thyroid gland is overactive or under-active, a range of health and mood problems can occur. For instance, those suffering from an under-active thyroid gland (hypothyroidism) often have a slower heart rate, feel cold and tired, or may suffer from constipation and weight gain. It may also be responsible for slower growth rates in children. An overactive gland (hyperthyroidism) causes nervousness, irritability, and poor concentration. 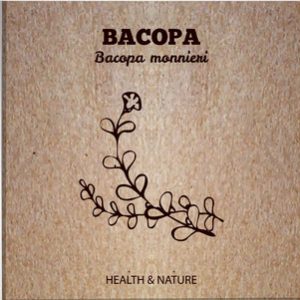 Benefits of Bacopa for the thyroid

There are many herbal medicines that may treat thyroid disorders including Bacopa. Some thyroid supplements contain bacopa as well.

Thyroxin is a complex iodine rich hormone secreted naturally by the thyroid gland. It is a derivative of the amino acid tyrosine, and is secreted directly into the bloodstream where it is transported to various organs, especially the liver and kidneys.

Since Thyroxine affects almost all of the body’s systems, it is vital that proper levels are maintained, to ensure that good health is preserved. It has long been assumed that thyroid problems should be treated with iodine, or iodine supplements. This however depends on whether the cause of the problem is hyperthyroidism, or hypothyroidism. Supplementing with iodine will only help if the condition is caused by iodine insufficiency.

Bacopa Menniera is proved to be a highly potent medicinal plant. From the results of experimental and clinical trials, there is little doubt that Bacopa is one of the best all-around herbal tonics available. Ancient claims of it’s therapeutic value has been confirmed with regard to cognitive function. However, further research is required to validate its effectiveness in certain other disorders.

A scientific study on mice showed that high doses of Bacopa (200mg/Kg) acts as a very potent stimulant to help fight hypothyroidism, by boosting the concentrations of Thyroxin (T4) by up to 41%. The study therefore vigorously suggests that Bacopa extract does indeed have a stimulatory effect on the function of the thyroid gland.

Research has demonstrated that Bacopa saponins inhibit cytotoxic activity for sarcoma-180 cells. It is thought that this may be due to Bacopa’s inhibition of DNA replication in the cancerous cell.  The saponins are found to have anti-hemolytic and antihelmintic activity.  However, the doses in the study were very high, and the typical 200-400 mg daily in humans may not have the same effect.